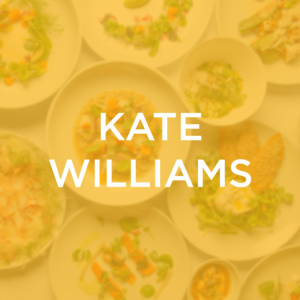 A Detroit native, Kate Williams grew up surrounded by a large Irish Catholic family where food and drink were the main event. After graduating from the French Culinary Institute in New York City, Williams spent time in Chicago where she served as Sous Chef to Wolfgang Puck. She then returned to Detroit for roles as Executive Chef at Detroit’s Republic Tavern and Rodin. Williams also cooked in Copenhagen at the famed Relae restaurant.

Kate’s second restaurant, Karl’s, opened in August 2019 within The Siren Hotel in downtown Detroit. Karl’s takes inspiration from Chef Kate’s great-great-grandparents Anton and Elizabeth Karl, and the bakery they once owned on the East Side of Detroit. Offering all-day dining for breakfast, lunch, and dinner, the menu at Karl’s is composed of quintessential luncheonette classics with a strong focus on technique and ingredients.