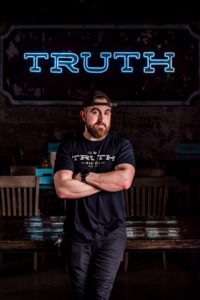 Leonard Botello IV started TRUTH BBQ in a small shack on the side of the highway in Brenham, Texas in 2015. An unknown newcomer in the Texas BBQ community, he shocked everyone when he landed the #10 spot on the coveted and celebrated Texas Monthly Top 50 list just two years into his BBQ journey. Leonard also competed on the Food Network show Chopped, winning his episode of Chopped Grill Masters against stiff Texas BBQ competition. Leonard most recently opened his second TRUTH location in the heart of Houston, Texas. TRUTH BBQ is known for Central Texas Style brisket, ribs and sausage; homemade sides and triple layer cakes that are as big as the 2lb beef ribs served on Saturdays.