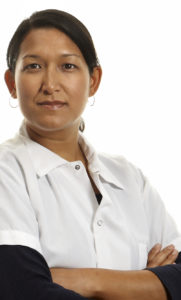 Baker Roxana Jullapat, a Los Angeles native of Costa Rican and Thai descent, pursued a degree in journalism before turning to cooking. While taking a break after graduating from college, Roxana found herself baking a tarte tatin in the kitchen of Café Figaro in the up and coming neighborhood of Los Feliz. Her fate was sealed. Over the next ten years she held tenures at nationally acclaimed restaurants including Campanile, Bastide, Lucques, AOC and Clarklewis. In the fall of 2011, she teamed up with chef Daniel Mattern to open Cooks County where she headed the bread and pastry program until her departure in 2014. She is the founder and organizer of “Bakers Will Bake,” a yearly bake sale and fundraiser benefiting garden-based education projects around Los Angeles. Roxana’s strongest suit is in working with seasonal fruits and heritage grains. Her menus are perhaps one of –if not the most- farmers’ market driven in town. She’s currently working on her upcoming bakery “Friends and Family,” opening later this spring in East Hollywood.