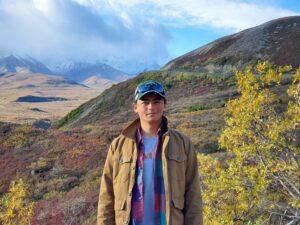 Sam Schimmel is St. Lawrence Island Siberian Yupik and Kenaitze Indian from Kenai, Alaska. Sam has experienced firsthand how Climate Change impacts food security in Arctic communities. In 2018, Sam was appointed by the Governor of Alaska to serve on the State of Alaska’s Climate Action Leadership Team, where he helped craft the state’s policy on climate change. He continues to support climate awareness and education as an Advisory Board Member for the Center for Native American Youth and is the Co-Chair of the Board of Directors for the Arctic Youth Network. In 2021 Sam launched Operation Fish Drop, a program which sought to give urban Native populations access to traditional foods like salmon. Over the course of several months, Sam was able to secure and distribute enough fish to feed over 5,000 people. He is currently fundraising to keep the program going. Sam is a current senior at Stanford University.