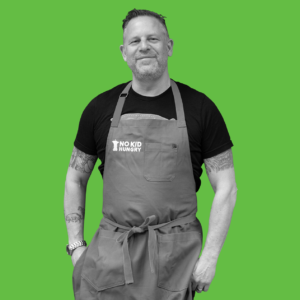 One of Boston’s most well-known and respected chefs for more than 20 years, Andy Husbands is the award-winning Chef/Owner of The Smoke Shop.  The Smoke Shop is Andy’s heart and soul and is his passion project. As the co-leader on one of the country’s most respected competitive barbecue teams, IQUE BBQ, his dream has been to share his barbecue knowledge and expertise with the people in Boston and Cambridge.

Chef Husbands has been praised both locally and nationally for his bold flavors, commitment to using the best ingredients and seasonality, receiving nods from countless publications, from the Boston Globe and Boston magazine to Wine Spectator and Star Chefs. Andy has been a James Beard Best Chef New England Semi-Finalist twice and was honored as the Massachusetts Restaurant Association as Executive Chef of the Year 2014. Andy has been featured on the Cooking Channel’s “Taco Trip” with Aaron Sanchez and he has been a contestant on Fox-TV’s “Hell’s Kitchen”. He has appeared on numerous national and local television shows and he has participated in national culinary events across the country.

Husbands started his career with an after-school baking job at the age of 14 and never looked back. After arriving in Boston, the Seattle native took a job as the sous chef at the nationally renowned East Coast Grill under Chris Schlesinger.  Prior to opening Tremont 647, Husbands took a cross-country trip on his motorcycle, working in several San Francisco-based restaurants and living on a New Mexico farm during his travels. These experiences greatly influenced the bold and adventurous, seasonally-focused menu at Tremont 647, which he opened upon his return in 1996.  Since then, he has been a culinary leader in Boston, a cookbook author, and one of the region’s most philanthropic and involved chefs in the community.

He has published four cookbooks: The Fearless Chef, Wicked Good Barbecue, Wicked Good Burgers and most recently, Grill to Perfection with co-authors Chris Hart, his partner on the IQUE BBQ team and Andrea Pyenson of the Boston Globe.

When he is not in the kitchen he is competing with his internationally known BBQ Team: IQUE.  In 2009 IQUE became the first non-southern team to win the World Championships at The Jack Daniels World Championships in Lynchberg, TN.  In 2007 IQUE place first in brisket out of 510 teams at the Kansas City Royal.

Devoted to helping his community, Chef Husbands has been working to eliminate childhood hunger for the past 20 years with the non-profit, Share Our Strength.  He is an Honorary Chair of Share Our Strength’s premier event Taste of the Nation. He has also hosted an annual benefit for Share Our Strength that has raised over $180,000 to fight childhood hunger over the past 17 years.  Andy is also on the Restaurant Committee for the Rodman Celebration, raising funds for youth focused social service agencies that support at-risk kids in Massachusetts.

Andy also has a segment on WBUR’s Radio Boston called “Farm to Fork”, where he visits local farms, talks to farmers, and creates a recipe from their harvest. Andy resides in the Boston area with his wife, Rice.