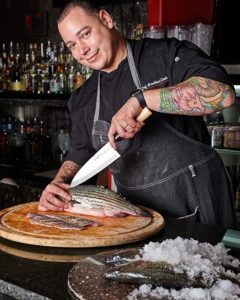 Brother Luck has been working in professional kitchens since the age of 14. During high school he was awarded multiple culinary scholarships through competitive cooking organizations such as C-CAP (Careers through Culinary Arts Program) and The Art Institutes (Best Teen Chef 2001). Originally from San Francisco, Brother Luck has worked in many fine dining kitchens around the world including the Takitei and Kinjhoro Ryokans located in Kanazawa, Japan. He is a graduate of The Art Institute of Phoenix and also a Certified Executive Chef through the American Culinary Federation. Currently the Chef / Owner of Brother Luck Street Eats located in Old Colorado City and soon to open Four by Brother Luck. Chef Brother Luck and his eatery were recently named 2015 “Most Cutting Edge Restaurant” and “Best Local Chef” by The Gazette and Colorado Springs Independent. Brother Luck was the winner of Food Network’s Beat Bobby Flay where he won the judges over with his love of pork and also a finalist on Food Network’s Chopped where Alex Guarnaschelli called him “a wizard in the plating department”.

Chef Brother Luck started his solo venture in the back of a local punk rock bar in Colorado Springs three years ago. He decided that it was time to start serving his own style of food and begin a new chapter. First he did the “Street Foods Tour” and next was the “Willy Wonka Dinner“. These creative dining experiences eventually led into his “Urban Cuisine” restaurant. With all of the culinary journeys Brother Luck experienced throughout his career he decided to go back to the basics; stove, burner, food, and customer.