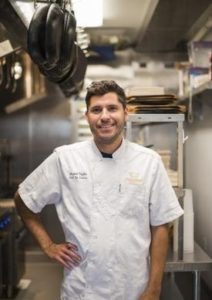 When the owners of Chianina Steakhouse were hiring a new chef, they didn’t have to search far.  In fact, they stole their new chef right out of the kitchen of a neighboring restaurant a few doors down.  Luckily that restaurant was Michael’s On Naples, part of Michael’s Restaurant Group, which also owns Chianina, and the chef was one of their own –Chef Bryant Taylor. After paying his dues as sous chef at Michael’s On Naples, Chef Bryant found himself at the helm of one of the nation’s Top 10 Steakhouses according to the gourmands at Gayot. Chianina is the only restaurant in the entire United States to breed, raise and serve Chianina beef– an Italian breed of cattle. Chef Taylor describes his culinary style as simplistic, yet refined, with Italian and French influences.