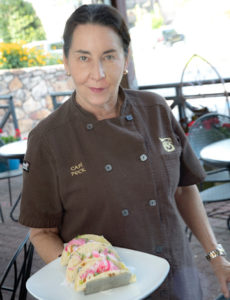 Capi Peck is a Little Rock native with deep culinary roots.   Her love of great food, cooking and the hospitality business grew from her childhood experiences at her family’s establishment, the Sam Peck Hotel.   As a tribute to her culinary roots, Capi serves some of Sam Peck’s creations at Trio’s, the restaurant she opened in Pavilion in the Park in 1986 with her partner, Brent Peterson.  Trio’s has won many awards during the last 32 years and was recently named Best Farm to Table restaurant in the state of Arkansas by Travel and Leisure magazine.

In addition to being very hands-on at Trio’s, Capi is a long-time community advocate and is involved in many civic and charitable organizations.

She served on the Little Rock Advertising and Promotion Commission, the governing body of the Little Rock Convention and Visitors Bureau, for 12 years and co-chaired the successful Restore Robinson Campaign which led to the design and construction of the Robinson Center Performance Hall.

Capi is past president of the Arkansas Restaurant Association and received the state’s Salut au Restaurateur award from the AR Hospitality Association.  She was appointed by Governor Mike Beebe to serve on the Public Health Advisory Board for the state of Arkansas and served eight years.

Capi is a volunteer chef in the Cooking Matters program, part of the Arkansas Hunger Relief Alliance.  Cooking Matters focuses on teaching low income families how to cook tasty and nutritious food on a budget.  She and Brent taught the first Spanish language class in Little Rock.

She and Brent are Partners in Education with the Little Rock School District where they are both active alums of Hall High School.

Capi was elected to the Little Board of Directors as the Ward 4 representative in 2016 and currently serves as city liaison to LR Parks & Recreation, the Arts and Culture Commission, Little Rock Sustainability Commission, Bike Friendly Community Committee and Age-Friendly Little Rock Commission.  She is also a member of the Vanguard Cities team to address homelessness and played a role in a Bridge to Work which provides the homeless community with day jobs beautifying the city.

She is a member of Central Arkansas Executives Association and was named member of the year in 2015.  She is also a member of Rotary 99, and in  May of 2018 was named a Paul Harris fellow for her work and advocacy in the community. In December of 2018, Capi was the Grand Honoree recipient of the Tikkun Olam award presented by the Jewish Federation of Arkansas.  Tikkun Olam is Hebrew for repair the world.

Her most recent project is Operation Song Little Rock, a non-profit based in Nashville that pairs professional songwriters with veterans and active military to help them tell their stories through song.

Capi is extraordinarily proud of the longevity of Trio’s, now almost 33 years old.  Her staff is her family, and she has mentored countless young people who have worked with her over the years.  She often tells people that in spite of the long hours and challenges of the restaurant business that she has the best job imaginable because she gets to welcome, nourish and nurture people daily.

Capi loves Little Rock and considers herself an ambassador for her home town.