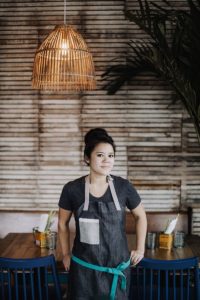 Christina Nguyen is the chef and co-owner of Hola Arepa in South Minneapolis and Hai Hai in Northeast Minneapolis.  She and her husband Birk started Hola Arepa as a food truck in 2011 and they expanded it into a brick and mortar restaurant in 2014 serving Venezuelan arepas, Latin American small plates, and tropical cocktails.  Her brunch dish Tostada Chilaquiles was featured on the cover of Food & Wine Magazine in 2015.  Hola Arepa was also named one of Bon Appetit’s 50 Best Restaurants that year too.

Hai Hai, their latest restaurant which opened in Nov 2017, focuses on Southeast Asian street food & cocktails, pulling inspiration from dishes that Christina grew up eating and from her travels around Southeast Asia.  Hai Hai has gotten recognition from national press including Eater’s 18 Best New Restaurants in America, Thrillist’s 13 Best New Restaurants in America, and Esquire Magazine’s 20 Best New Restaurants. Christina was also named Esquire’s Rising Star Chef of the Year in 2018. Christina was a semifinalist for a James Beard Award in the Best Chef Midwest category in 2018 and was nominated as a finalist in the same category in 2019.