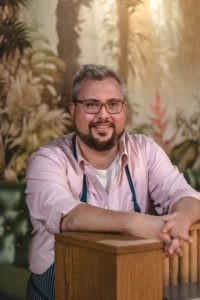 Overseeing all of Bar Mezzana’s Back of House operations, including its overall culinary direction, Colin Lynch was previously the Executive Chef of the Barbara Lynch Gruppo for nearly eight years.

He received his Bachelor’s Degree in Professional Studies at the Culinary Institute of America and, during that time, he completed his internship at Chef Barbara Lynch’s flagship restaurant No. 9 Park.

He was on the team there as Chef Barbara Lynch received her James Beard Award for “Best Chef Northeast” in 2003. Colin was then promoted to the role of Chef de Cuisine at No. 9 Park starting in 2004. During this time, as Chef Barbara Lynch expanded to the South End with B&G Oysters and The Butcher Shop, Colin helped her develop menus and the teams.

In 2007, he took on the expanded role of Executive Chef for the Gruppo, where he was responsible for the Gruppo’s entire Back of House operations, including menu development, training, quality control, and supervision of all the Gruppo’s restaurants’ Chef de Cuisines. This role included planning the Gruppo’s new Fort Point restaurants in the FP3 development, Drink, Sportello, and Menton. While leading the opening of Menton, Colin’s efforts resulted in Menton achieving Boston’s first Relais & Chateaux designation, being nominated by the James Beard Foundation for “Best New Restaurant” in 2011, being named by Esquire as one of the best new restaurants in the country, and receiving The Boston Globe’s first four-star review from food editor, Devra First.