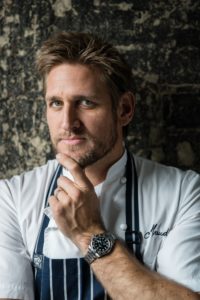 Curtis Stone is a chef, restaurateur, author, media personality, and businessman. He began his cooking career in his homeland of Australia and later honed his skills at Michelin-starred restaurants in London under renowned chef Marco Pierre White. His first solo restaurant, Maude (Beverly Hills, CA), opened in 2014 to rave reviews. Curtis partnered Princess Cruises to open SHARE by Curtis Stone, a six-course fine dining experience at sea in 2015, that according to People Magazine has cemented the cruise line’s reputation as a massive and influential culinary presence.  Curtis opened his latest restaurant, Gwen Butcher Shop & Restaurant (Hollywood, CA), with his brother Luke in July 2016. Curtis’ restaurants have been honored with top accolades including Restaurant of the Year (Eater LA), Best New Restaurant & Best Restaurant (LA Weekly), Most Beautiful Restaurant in the Country (Eater National), while Curtis himself has received awards such as Chef of The Year 2016 (Eater LA – both Editor’s and Reader’s Choice) and the first ever Excellence in the Culinary Arts Award from the Australian Government.  With the success of the restaurants and growing demand for customized culinary experiences, Curtis Stone Events was launched in 2018.  Designing and tailoring personalized occasions while upholding the standards of Maude and Gwen, this new full-service company aims to raise the bar within the live events industry.  Curtis has appeared on a number of top-rated programs including Take Home Chef (TLC), Top Chef Masters (Bravo), and Food Network’s All-Star Academy. Curtis is Head Judge on Emmy-nominated Top Chef Junior, an extension of the NBC Top Chef franchise, alongside host Vanessa Lachey. Curtis is a New York Times bestselling author with six cookbooks, his most recent titled, Good Food, Good Life, and is a regular contributor to several magazines and television shows in the United States and Australia.  In 2016, Curtis began a new pledge to give back: #Commit2One, wherein each year he partners with a charity and devotes the majority of his time and resources to the cause.  As part of this initiative, he has raised funds and awareness for The National Young Farmer’s Coalition, Chrysalis, AdoptTogether, and his current charity, Share Our Strength.  Curtis is married to actress Lindsay Price and the couple live in Los Angeles with their two sons.