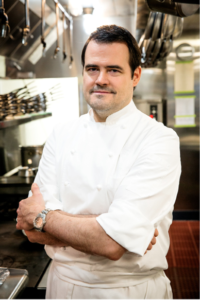 He began his culinary career at the age of fourteen, where he was exposed to and learned to appreciate all that his surroundings had to offer, including fresh fish and shellfish from the Peconic Bay and Long Island Sound, to the fruits and vegetables from local orchards and farms.

Dan worked all throughout high school as a line cook, splitting time one summer to work with a friend on a fishing boat, where he developed a fondness for all matters piscine.  After graduating high school and still eager to learn about the culinary arts, Dan enrolled in the Culinary Institute of America in Hyde Park, NY.

After graduation, he worked his way around New York City most notably under Chef Daniel Boulud.  Later, after relocating to Westchester County, NY.   He soon became the Executive Chef at ReLish in Sparkill, NY.  There he received praise from numerous magazines including “Best New Restaurant”, from Hudson Valley Magazine, where they wrote “This is a place where food is so revered it’s almost a religion”.

From ReLish he went on to open Restaurant One, in Irvington, NY as the Executive Chef.  While there he received an “Excellent” from The New York Times, was voted “Best New Restaurant” from Westchester Magazine, received Five out of Five Stars from In Town Magazine, and earned a top food score from the Zagat Survey.

Since starting al tavolo his culinary career has come full circle.  He is now surrounded by the all the abundance that Connecticut’s northwest corner has to offer, including all the products that come from Arethusa’s own award winning dairy farm, as well as Arethusa’s own vegetable and herb gardens.

In 2016 Dan was nominated as a semi-finalist for a James Beard Award as “Best Chef Northeast,”  the same year, al tavolo was named by OpenTable as one of their “Top 100” restaurants in the country, for a third year in a row, while having already been on thier list of top restaurants that are “Fit for Foodies.”

Most recently, Dan was named the “2017 Chef of the Year” by the Connecticut Restaurant Association.

As he explains, “You always take more pride in the product that you are working with when it is your own.”