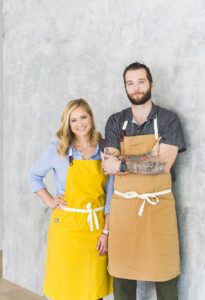 Patrick is a self-taught pitmaster and Purple Heart recipient from injuries sustained during a tour in Iraq. It was during his recovery that he was hit with the barbecue bug. After culinary school, he cooked in some of Houston’s most acclaimed kitchens, including Underbelly, Brennan’s, Killen’s Barbecue and Southern Goods, while building his barbecue business on the side. Erin spent her early career in New York City, working at Per Se and Babbo before returning to Houston in 2010 to serve as executive chef of Plonk! Beer & Wine Bistro. She served as culinary director for the Clumsy Butcher Group and then executive chef at Main Kitchen before working as a sommelier at wine bar Camerata to hone her front-of-house skills. She won an episode of Chopped! in 2016, which provided the initial funding for Feges BBQ.