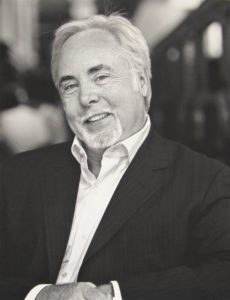 George McKerrow Jr. is a 40-year veteran of the restaurant business with a history of success in both fine dining and casual concepts. He opened the first LongHorn Steakhouse as a neighborhood restaurant in 1981, a time when Atlanta had few choices in casual dining. He successfully evolved that single location into RARE Hospitality, which owns LongHorn Steakhouse and The Capital Grille and was sold to Darden Restaurants in 2007. McKerrow retired from RARE in 2000. He co-founded We’re Cookin’ Inc. (owners of restaurants Aria & Canoe) in 1996 with Atlanta chef Gerry Klaskala and Ron San Martin. In addition to serving on the board of directors for the National Restaurant Association (1997-2003) and the Culinary Institute of America (1996-2002), McKerrow received the first Lifetime Achievement Award from the Georgia Restaurant Association in 2007. In 2008, he was inducted into The Atlanta Hospitality Hall of Fame by the Atlanta Convention & Visitors Bureau. Along with his partner, media entrepreneur, philanthropist and environmentalist Ted Turner, McKerrow founded Ted’s Montana Grill in January 2002 and serves as the company’s CEO.