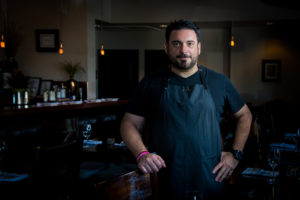 Owner and Executive Chef Gio Osso captures the daily dynamism of authentic Mediterranean cooking at Virtú Honest Craft, located in Scottsdale, AZ’s Bespoke Inn. Among the laidback, coastal villa-vibe of his restaurant, Osso creates a menu that changes multiple times a week, highlighting the best ingredients sourced seasonally from across the country and around the world. “I like big, bold flavors,” Osso says, “but it has to be clean and crisp, involving all of the senses.” To allow himself the freedom to prepare such flavorful, yet simplistic, straightforward dishes, Osso spends as much time as necessary to find the ideal product, be it seafood from Spain, cheese from Italy, or spices from Northern Africa.

Much like his dishes, the chef considers each of his employees individually to ensure a happy and productive team. “Someone might need you to be a coach, someone else might need you to be a friend,” he explains. “If you give me 120%, I’ll give it right back to you—I want to foster greatness.” Overall, he strives to be the best teacher he can be.

“I started cooking when I was still in a highchair,” Osso explains, referring to the pot his mother gave him to “stir” while she prepared meals. “It was the only way I would eat—so it was no shock to my parents when I wanted to become a chef.” Although he grew up in Cliffside Park, NJ, his culinary inspiration comes from summers spent in Southern Italy on a farm in Calabria with animals, gardens, and a large family that convened every year around family recipes.

After gaining kitchen experience in New Jersey, Osso graduated from the fast-paced New York Restaurant School in 1993 at the top of his class, and cut his teeth with an externship at March under Chef Wayne Nish, in local pizzerias, and in hotel kitchens such as at the Algonquin Hotel. In 1994, John Foy’s Sonoma Grill in East Rutherford, NJ plucked Osso for its sous chef, placing him alongside Chef de Cuisine Richard Lowack. Lowack served as a culinary and operational mentor to Osso, and the two went on to work together at numerous other restaurants until Osso struck out on his own as executive chef for Stamford, CT’s Fio’ Ristorante in 1996, and then opened his own restaurant, café, retail, and catering operation, American Gourmet, two years later in Allendale, NJ.

Osso linked up with his mentor again in 2002, when Lowack requested Osso’s help in the pastry department of his new Phoenix restaurant. Soon after arriving in the desert, Osso launched Sugo Pastaria and Wine Bar, an upscale pasta-centric Italian spot. He spread his culinary influence further throughout the city by consulting on restaurants including Luc’s, Oscar Taylor, Blue Note Cellars, and Spiga. After then spending two years at Scottsdale’s Estate House, revamping the culinary program as executive chef, Osso’s career took an unexpected turn in 2010 as he jumped at an opportunity to oversee concession operations at Phoenix Sky Harbor Airport, via HMS Host. Managing on-site operations and an off-site commissary, Osso successfully introduced 13 local concepts to the airport, substantially elevating its culinary offerings.

Virtú Honest Craft, which debuted in 2013, sprouted in Osso’s mind back in 2006, while he spent a month travelling with friends throughout Southern Italy, sampling local Mediterranean cuisine. In the wake of Virtú’s success, Osso opened Nico Heirloom Kitchen as a posh, sophisticated spot for seasonal West Coast-inspired Italian cuisine, in Gilbert, AZ, in 2016.

Chef Osso resides in Gilbert with his wife, Bethany, their three children, and two dogs, a German shepherd and a boxer. Away from the kitchen, the musician-at-heart loves playing his guitar as often as he can, and gets his kicks on the soccer field as well—he almost became pro, once upon a time.