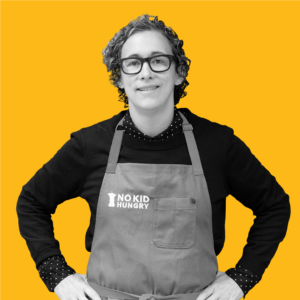 Hillary Sterling is the chef at Vic’s, a neighborhood Italian restaurant from Victoria Freeman and Marc Meyer (Cookshop, Hundred Acres, & Rosie’s) along with partner Chris Paraskevaides. The NoHo restaurant is in the old Five Points space, and the name is a nod to Freeman’s first restaurant, an early ‘90s former SoHo eatery, where she first met Meyer.

A Brooklyn native, Sterling fell in love with hospitality and cooking as a teenager while bussing tables at a casual seafood restaurant in Montauk, Long Island. Years later, after earning a business degree from Indiana University, Sterling began taking night classes at a local cooking school in Bloomington, which promptly refocused her attention on food. After graduating from Le Cordon Bleu in Chicago in 2003, Sterling returned to New York City and got a job at Bobby Flay’s first restaurant, the popular Southwestern spot, Mesa Grill, where she worked her way up from line cook to sous chef. After three years at Mesa Grill, Sterling moved to Flay’s Bolo, the three-star Spanish restaurant. Then, in 2006, Sterling made a pivotal move to join Mario Batali and Joe Bastianich at their NoHo classic, Lupa Osteria Romana. Sterling found her calling in Italian food and, as a sous chef there honed her pasta-making skills and fine-tuned quintessential preparations found in the regions of Rome and Lazio, based on straightforward dishes that let local and seasonal ingredients shine.

Building on her burgeoning devotion to Italian cuisine, in 2009, Sterling joined the team at A Voce Madison as a sous chef under executive chef Missy Robbins. Sterling rose quickly to chef de cuisine and spent four years in that role, refining her craft and leading the team of cooks. Sterling helped maintain A Voce’s Michelin star rating during her entire tenure with her authentic and inspired Italian cooking, and in 2011, Sterling was recognized by Star Chefs as a “Rising Star.”

In 2014, Sterling was introduced by Robbins to Freeman and Meyer, and found their market-driven approach in keeping with her ethos. The modern, airy aesthetic of Vic’s is reflected in Sterling’s approachable menu of thoughtfully prepared Italian dishes, such as oyster mushrooms with potato, botarga and lemon and sheep’s milk agnolotti with hazelnut. Building on the innate principals of Italian cooking, she sources ingredients locally—from finishing salt that’s made in Hell’s Kitchen to flour ground in New York State—and lets her menu be guided by the seasons.