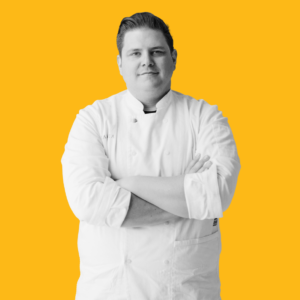 Joseph Flamm served as the Executive Chef at Chicago’s Michelin-starred Spiaggia and Café Spiaggia until October 2019. Working with and for the inimitable Tony Mantuano, Chef Joe learned fine dining with precision and confidence. Growing up in a large Italian family, Joe fell in love with cooking while spending time in the kitchen with his Grandma Mary making homemade pasta. He formalized his culinary skills at Le Cordon Bleu College of Culinary Arts in Chicago and continued to sharpen his skills in Chicago’s finest kitchens including Art Smith’s Table 52, Stephanie Izard’s Girl and the Goat, and Bill Kim’s Belly Q. He has cooked for presidents, celebrities, the James Beard Foundation and still, Joe’s favorite person to cook for is his brilliant wife, Hillary, who he lives with on Chicago’s Westside where they mostly laugh at each other and eat pretty well.