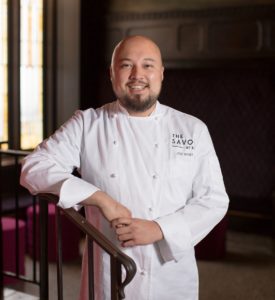 At age 16, West started a career in the Kansas City culinary community at 40 Sardines, working under award-winning chefs, Michael Smith and Debbie Gold. He continued his culinary education by winning a full-tuition scholarship to Johnson & Wales University in Denver, CO, ultimately graduating on the dean’s list.

The Kansas City native brings over 16 years of culinary experience to The Savoy, having previously worked as chef de cuisine at Bluestem, the 2-Michelin star Alex at Wynn Las Vegas, and the Cincinnatian Hotel as executive chef – which earned a AAA Four Diamond rating under his direction. After working in cities across the country, West returned to Kansas City as executive chef at Stock Hill, followed by the launch of Kusshi, his award-winning pop-up dining experience set in secret locations throughout Kansas City.

Inspired by the community’s reverence for The Savoy’s rich history, West showcases American classic cuisine, utilizing old world technique with the precision of modern day standards, and a focus on local ingredients – a true expression of both the chef and the seasons. He won the Iron Fork Competition in Cincinnati and was named one of Eater’s Young Guns in 2014. In 2015, he went on to win 435 Magazine’s Best Supper Club award. West was a Feast Magazine Best Chef nominee, and a National Finalist for the Ora King Awards in 2017.