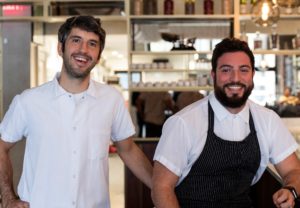 Kevin O’Donnell and Michael Lombardi are the co-executive chefs and owners of SRV, a Venetian inspired restaurant in Boston’s South End. They met cooking in Orvieto, Italy, where their shared love for making pasta and Italian culture overrode their desire to return to culinary school. With a grand total of one tattoo between the two of them, they moved to NYC to work under Mark Ladner at Del Posto. A few years later they jetted back to Europe to oversee the kitchen of L’Office, a neo-bistro in Paris. The team won Best New Bistro in 2012 and credits their success to an oblivious recreation of French food that locals found to be both inventive and refreshing. Ready to be closer to home, they relocated to Boston and joined up with restauranteur Jim Cochener at The Salty Pig. The trio, as partners,  opened SRV in January of 2016 with pastas made from house milled grains and reinterpretations of classic cicchetti. SRV earned a perfect 4 star review and received Best Italian Restaurant two years in a row from Boston Magazine. Awarded Best New Restaurant by Eater Boston and a James Beard semifinalist for Best New Restaurant in America, SRV continues to explore the unique flavors and techniques of northern Italy.