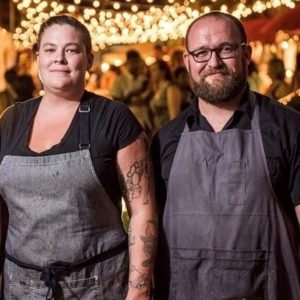 Leighann Smith first learned her way around a knife at her family’s home kitchen in San Francisco. Her culinary passion was ignited by family meals and her father’s love of hunting deer and elk. After making her way through plenty of kitchens, hot lines, and dish pits, she found herself drawn to butchery. And then she started driving south.

In 2011, Smith moved to New Orleans to work at the reputable Cochon Butcher, where she spent years sharpening her craft and expanding her charcuterie skills. With Cochon as a classroom stocked with a library full of butchery books, Smith was making a name for herself in the Crescent City cutting and curing meat.
Daniel Jackson, hailing originally from Buffalo NY, moved to New Orleans to study English and Philosophy at Tulane University, where he stumbled upon a love of hot glass art and a first career as a production glassblower. Little did he know his path would veer sharply when he walked into Cochon Butcher looking for extra work. Upon meeting Smith, the two quickly found that they shared an appreciation for old world butcher techniques and sustainable livestock practices.
In April of 2018 Smith and Jackson opened Piece of Meat, a whole animal butcher shop and restaurant, where education for the community is as much a part of their mission as making delicious meaty treats.