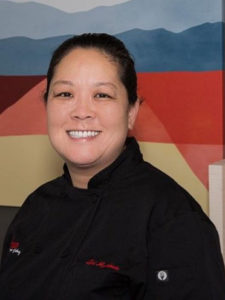 Lori Hashimoto is a chef and co-owner of Hana Japanese Eatery, an award-winning, family-operated restaurant serving traditional, home-style Japanese cuisine. Since it opened in 2007, Hana has garnered “Best Sushi” and “Best Japanese Restaurant” awards multiple times by every major media outlet in Phoenix. Hana is on the national radar, too, having been named one of the country’s top 20 Japanese restaurants by Travel & Leisure magazine and a top 10 Arizona restaurant by Zagat. For the past six years and counting, she has been a regular guest on Phoenix television station KTVK’s lifestyle program “Your Life Arizona,” demystifying Japanese cooking for home cooks. Lori, through Hana, has dispelled the notion you can’t get fresh fish and seafood in the desert. She is also an active member of Les Dames d’Escoffier, an international philanthropic organization of women culinary leaders. A third-generation Japanese American from a long line of farmers, Lori finds inspiration in combining old-world Japanese tradition with modern sensibilities as she instructs the next generation of family members from behind the sushi counter at her cozy BYOB.