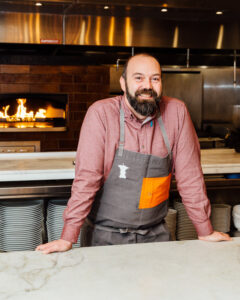 Matt Bell is the executive chef at Gray & Dudley, located in the 21c Museum Hotel in Nashville, Tennessee. Bell fell in love with Southern cuisine and culture when he moved to the region in 2005 from his home state of Montana. He studied at the Texas Culinary Academy in Austin, TX and later moved to Little Rock, AR, where he began his career at Ashley’s, an upscale Southern restaurant inside the esteemed Capital Hotel.

In 2013, Bell opened his first concept, South on Main, a restaurant and performance venue, featuring the best in Southern culture and cuisine. South on Main was dubbed the best restaurant in Arkansas by Business Insider and received national recognition from the likes of Town & Country, National Geographic and more. Bell has contributed to articles for Food Republic, Culture Trip, and Bourbon and Boots, and his recipes have been published in several cookbooks, including The Southern Foodie’s Guide to the Pig and United Tastes of the South.

Bell is a passionate advocate of social change. He has hosted multiple benefit dinners and has lobbied on Capitol Hill alongside No Kid Hungry to protect programs that benefit children impacted by food insecurity. An avid music fan, Bell enjoys playing the saxophone and DJing when he’s not in the kitchen.