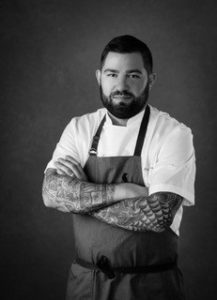 Michael Corvino is the Chef/Owner of Corvino Supper Club & Tasting Room, which
opened March 2017 in Kansas City, Missouri. His contemporary American cuisine is
described as an interplay of ingredients with a juxtaposition of texture, flavor, shape, and
color. The restaurant earned the coveted AAA Four Diamond Award just two months
after opening. He was a 2019 James Beard Nominee for Best Chef: Midwest, and Food &
Wine Magazine named the restaurant to their 2017 Most Exciting Restaurant Openings.
Chef Corvino first came to Kansas City to become the Executive Chef/General Manager
of the iconic American Restaurant. He formerly served as executive sous chef at the
Rosewood Mansion on Turtle Creek in Dallas under Chef Bruno Davaillon. Prior to that,
he opened The Nines luxury hotel in Portland, where he was the executive sous chef for
its two restaurants, Urban Farmer and Departure Restaurant. His earlier positions include
Chef de Cuisine at The Ritz Carlton in Naples, and The Peninsula Chicago. Chef Corvino
began his culinary career at the Marcus Whitman Hotel in his hometown of Walla Walla,
Washington.