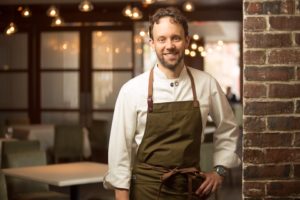 Michael Pagliarini is chef/owner of Giulia and Benedetto, two award-winning Italian restaurants located in Cambridge, Mass.  Guided by a passion for the history and authenticity of regional Italian cooking and a commitment to local, sustainable farming, Pagliarini elevates rustic Italian food into fine dining stars.

A native of northeastern Pennsylvania, Pagliarini graduated from the University of Scranton with a degree in International Language and Business and a minor in Theatre.  After college, he moved to France to teach English as a Fulbright Teaching Fellow, but a longtime interest in food and wine was taking form and, upon returning home, he followed that path by attending the Culinary Institute of America.  After his culinary education, Pagliarini spent a decade developing his skills under the guidance of some of the country’s top chefs, including Michelin-starred Grant Achatz of Alinea in Chicago; Gordon Hamersley of Hamersley’s Bistro; and Michael Schlow of Radius and Via Matta (both now closed) in Boston.

With family ties to Umbria and extensive wine scholarship, Pagliarini is known for his intellectual approach to cuisine, leaning heavily on traditions and research to guide his choices as a chef.  In 2012, Pagliarini and his wife, Pamela Ralston, opened their first restaurant, Giulia, where he brought his years of travel, research and apprenticeship together to create a neighborhood gem that boasts a waitlist for reservations five years after opening. Giulia has received numerous awards and accolades including “Best Italian Restaurant” from Boston Magazine, “Top 50 Restaurants in Boston” from Zagat and “Best Pasta” from The Improper Bostonian.

In 2017, the couple opened Benedetto in the Charles Hotel with a goal of creating one of the country’s best Italian restaurants.  The incarnation of Italian cuisine at Benedetto explores a broader and more refined interpretation of Italian food, allowing Pagliarini to draw from his experiences in elite restaurants and marry that with his signature regional Italian style. Benedetto received rave reviews from the critics and media acclaim for its pasta and pastry programs, winning “2017 Best Pastry Chef” from Boston Magazine in its opening year.

Pagliarini and Ralston live in Somerville, Mass., just a short bike ride from both restaurants.