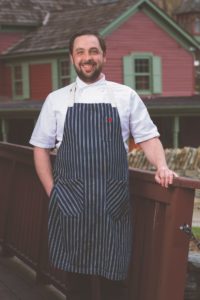 Chef Newman Miller is the Executive Chef in Residence at Star Hill Provisions™, the on-campus restaurant at the historic Maker’s Mark Distillery. Centered on creating a food and beverage program that’s truly “of the place,” Chef Miller and his team offer fine Kentucky fare and bourbon cocktails with locally sourced ingredients and, whenever possible, with produce and proteins supplied by distillery employees who operate small farms outside of their work at Maker’s Mark.

Born and raised in Washington County, Kentucky, just 10 miles from the distillery, Chef Miller’s passion for cooking started at just seven years old, when he wrote a letter to a culinary school expressing his interest in attending. After graduating high school, Miller did just that, studying culinary arts at Sullivan University in Louisville. He began his career in the kitchen at Louisville’s iconic Brown Hotel, before running the food and beverage program at a small hotel in Scotland. Returning stateside, Chef Miller moved to Chicago where he worked in research and development before preparing farm-focused dishes at a high-end Chicago restaurant. Chef Miller learned much of his bartending prowess by sitting at the bars of Chicago staples such as Sepia, The Violet Hour, Blackbird and others. A keen observer, Miller watched as the bartenders meticulously crafted cocktails to pick up on the techniques of bartending, which he equated to doing “sauce work” in a kitchen. In 2015, Miller returned to Kentucky, settling in Bardstown to open the acclaimed Harrison-Smith House restaurant and catering service with his family. In 2017, he became the proud, first-ever Chef-in-Residence at Star Hill Provisions, serving up his signature fine Kentucky fare and house-made cocktails, including the Maker’s Mark® Cask Strength Old Fashioned, stirred exactly 100 times.

Of his relationship with Maker’s Mark, “it wasn’t a matter of if,” says Miller “it was only a matter of when.” When he isn’t at Maker’s Mark, Miller can be found spending time with his wife Rachel and their two boys, or in a local bar enjoying the live music