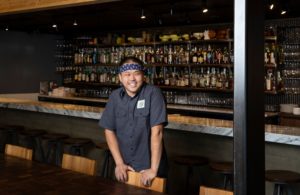 California native Nick Wong started cooking in sixth grade and was interested in pursuing a career in cooking almost immediately. He attended the University of California at Berkeley, frequently changing majors and always coming back to food. He graduated in 2007 with a degree in nutritional science—the degree closest to cooking that was available. He attended the French Culinary Institute in New York City before joining Momofuku, cooking at both Momofuku Ko and Momofuku Ssam Bar. After two years as a line cook at Momofuku Ssam Bar, he spent a year at Gramercy Tavern before returning home to California to work with Chris Cosentino at Incanto. Nick returned to Momofuku Ssam Bar in 2013 as sous chef and was promoted to chef de cuisine a year later. He moved to Houston in 2018 to open UB Preserv as chef de cuisine. UB Preserv was named the best new restaurant in Texas by Texas Monthly in 2019.