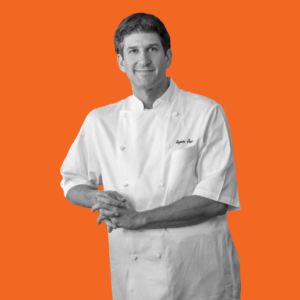 Ryan Pera is known for his thoughtful approach to cooking and his strong dedication to sustainable practices. The chef and co-owner of four celebrated concepts–Revival Market, Coltivare, Eight Row Flint and Night Heron–has built businesses allowing him to source products from within, whether it’s vegetables grown in Coltivare’s 3,000-square-foot garden or charcuterie cured in-house at Revival Market.

He moved to Houston with his wife, a vascular surgeon, in 2003 for her residency and soon found work as chef de cuisine at the Four Seasons Hotel Houston. He landed his first executive chef position at 17 Restaurant in the Sam Houston Hotel and was revered for his modern American menu. He opened The Grove as executive chef in downtown Houston before building craft butcher shop and cafe Revival Market with co-owner Morgan Weber three years later. Named one of the five best new artisan butchers in America by Bon Appetit, Revival Market allows Ryan to showcase his skills in craft butchering and charcuterie, giving the public a place to buy quality, sustainably raised meats. In 2014, Morgan and Ryan opened Coltivare, a cozy neighborhood restaurant and garden inspired by Ryan’s Italian heritage featuring Gulf Coast ingredients. Named one of Texas Monthly‘s 10 best new restaurants in the state, Coltivare was also included on Bon Appetit‘s list of the 50 best new restaurants in America. The duo turned to bourbon and tacos in 2015 when they opened Eight Row Flint, a modern Texas ice house. They opened Night Heron, a neighborhood bar serving dishes and drinks inspired by their travels, in February 2018.

The University of North Carolina at Chapel Hill grad got his start in the culinary industry washing dishes in his college town. He immediately took to the business and began cooking in some of North Carolina’s finest restaurants. Ryan moved to Manhattan to further his career, working under Chef Sottha Khun at the four-star Le Cirque and Chef Jonathan Waxman at Washington Park, where he was sous chef. Ryan is a founding member of the Organized Collaboration for Restaurant Affairs (OKRA), a group of like-minded restaurant and bar owners who pursue community and charitable initiatives in Houston. The organization opened the OKRA Charity Saloon in 2012, a not-for-profit bar in downtown Houston that has raised to date more than $1 million for local charities. He is on the culinary boards for both Recipe for Success, a foundation combatting childhood obesity, and No Kid Hungry, an organization aiming to end child hunger.

Ryan was named Food & Wine magazine’s People’s Best New Chef for the Southwest region in 2015, as well as Chef of the Year at the Houston Culinary Awards that same year. Ryan was named a James Beard Award semifinalist for Best Chef: Southwest in 2018.