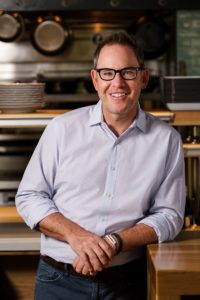 Sam Fox is the creative visionary behind one of the most successful restaurant groups in the U.S., Fox Restaurant Concepts (FRC). A nine-time James Beard Award nominee for Restaurateur of the Year, Sam is a New York Times best-selling cookbook author and was recently named one of the 50 most influential people in the restaurant industry by Nation’s Restaurant News for the fourth consecutive year.

Sam has earned some well-deserved street cred as a trend spotter and one of the most intuitive minds in the industry. He is known for popularizing the kale salad (#sorrynotsorry) and is recognized as one of the first to succeed in healthy dining with concepts that are thriving from coast-to-coast. He has been profiled by numerous media outlets, including Forbes, CBS News, and CNBC.

Sam got his start by packing a punch – literally. Using his college tuition to open his first restaurant at 20 years-old, Sam was forced to learn how to cook when he got into a fight with his chef, and the chef broke his hand. Fast-forward two decades and dozens of restaurant brands later, and you’ll find Sam’s passions remain the same: insanely delicious food, amazing design and unforgettable hospitality.

A “serial restaurateur” – Sam’s intense love of the restaurant business has him putting his fingerprint on just about everything in each restaurant he opens. Each and every menu item goes through a tasting with Sam. That cool water fixture at the North Italia sink? Sam picked it. That awesome bicycle hanging from the True Food Kitchen Pasadena wall – yup, Sam, too. Drive by the Phoenix corporate headquarters (lovingly called “Big Kitchen”) and the first and  last light you’ll see on is usually Sam’s office.

Sam generously gives back to the communities his restaurants serve through FRC’s charitable arm: Feed the Soul. Sam has been an avid supporter of the Boys & Girls Clubs since the company’s inception in 1998 and held the position of honorary chair for the American Heart Association’s 2013 Heart Ball. In addition, Fox Restaurant Concepts supports No Kid Hungry, notMYkid, and UMOM New Day Centers.

In his spare time, Sam enjoys going to the beach with his wife and children, sipping on various libations and thinking about new concepts. (See for yourself at https://www.instagram.com/samfox_official/.)

2015 Executive of the Year, University of Arizona Eller College of Management