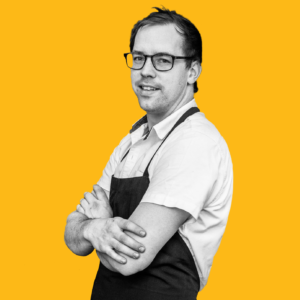 Chef Thomas Marlow hails from Fairport, New York and made his way to Charlotte to study at Johnson
and Wales University. While he was in school, he was able to work with some of the best chefs in the
city, including Chef Tom Condron and Chef Tommy Dyrness, learning the business and crafting his skills.
Before graduating, he spent a summer in Singapore and Chaing Mai, Thailand where he acquired much
of his own personal culinary style including the importance of respecting the ingredients that you have
available and instilling your passion into what you cook.

Chef Marlow joined Harper’s Restaurant Group in 2009 where he quickly moved up the ladder from line
cook to Sous Chef at Mimosa Grill. Under the tutelage of Executive Chef Jon Fortes, he honed his skills
and then moved on to other Harper’s Group locations such as Upstream, M5 and Zink. American Kitchen
before coming full circle back to Mimosa Grill as Chef de Cuisine and finally, Executive Chef.
While at Mimosa Grill, Chef Marlow has had the opportunity to travel to Birmingham, Alabama to work
in the kitchen of renowned chef Chris Hastings of Hot and Hot Fish Club. Here he cooked alongside Chef
Hastings, a 2012 James Beard Recipient of Best Chef in the Southeast, and witnessed his approach to
blending various styles of cooking using local harvest. Thomas also had the distinct opportunity work
with Master Charcuterist Francois Vecchio in Palmer, Alaska, where he learned the fine craft of salami
making. Chef Marlow now oversees Mimosa Grill’s charcuterie program, using natural pasture raise pigs
from Rock House Farm in Morganton, NC. Guests will find these unique products showcased on the
Mimosa Grill menu each day.

Perhaps Chef Marlow’s most profound culinary influences are based on his upbringing on his father’s
large farm where he connected personally with the hard work and effort it took to raise fresh
ingredients and product for market. He brings this respect for farmers and for the food they produce to
his work at Mimosa Grill where he uses only the best ingredients to create the restaurant’s
extraordinary cuisine and adds his own distinctive southern twist to each and every plate.