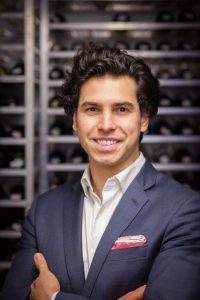 Born & bred in New York, Thomas studied neurobiology and classical piano at Cornell University, and all the while worked in restaurants to pay-off his student loans. In January 2011, Thomas diverted from his path toward a medical career, and took on the role of Wine Director at Chef Tom Colicchio’s restaurant Colicchio & Sons in New York City, and would soon thereafter join Chef Daniel Humm and the team behind the world-renowned Eleven Madison Park to create The NoMad in Spring 2012. He opened The NoMad as its Wine Director & helped it achieve its 3-Star New York Times rating within a few months of its opening. Thomas was chosen as one of the Best New Sommeliers of 2012 by Wine & Spirits Magazine, recognized as one of Forbes’ 30 Under 30 in 2013, and was most recently named one of Food & Wine’s Sommeliers of the Year of 2015. Most recently, Thomas has gotten into the world of winemaking, and has launched two exciting new wine labels: Terrassen in 2013, and Empire Estate in 2014, both with a focus on New York’s exciting upstate wine region, the Finger Lakes.