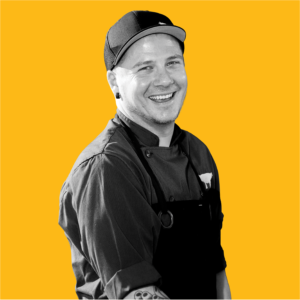 Some would say Chef Tim Lipman’s purpose in life is etched in his genes.

Growing up, he watched his grandmother grow gardens full of vegetables and tend to livestock in their central Florida town. Her Southern-Italian influence, mixed with an affinity for Southern-American cuisine, shines through today in the Lipman restaurant brand.

Lipman was introduced into the culinary world as a dishwasher in a country club. He quickly worked his way up through the ranks as garde manager, line cook and sous chef. Realizing his talents, Lipman attended the Florida Culinary Institute.

Upon graduation, he worked for the Little Moir’s brand in Jupiter, Florida, and through vision and hard work, eventually transitioned to executive chef of Leftovers Café. As he continued to refine his palate, he knew it was time to become his own boss.

Today, Lipman and wife and general manager Jenny own and operate two Palm Beach Gardens establishments: Coolinary Café and The Parched Pig. Though they are two different concepts, both locations rely on the notion that a restaurant is as much about good, clean and thoughtful food as it is about being a place for friends and family to gather and share the day’s stories.

Coolinary Café opened its doors in 2012; at its core is the spirit of community dining. Known for inventive meals, the spot was awarded “Best New Restaurant” by the Palm Beach Post, and Lipman was named “Best Chef.” Coolinary Café was also featured on the national Cooking Channel show, Emeril’s Florida. The Parched Pig debuted in early 2017 as an immersive bar where beverage, food and comfort meet and serves as a retreat from the demands of life. It was dubbed “Best Watering Hole” by Palm Beach Illustrated.

Every day, Lipman can be found in his open kitchen making ample use of seasonal ingredients while focusing on responsible, local farming.