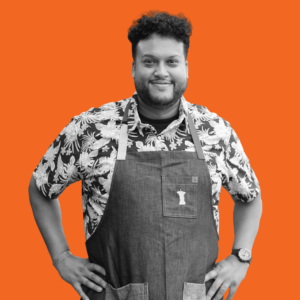 As the Chef and Owner of The Katherine in Ft. Lauderdale, Timon Balloo draws from his broad range of influences and experiences to bring bold, global flavors to every dish on the menu. From his own Chinese, Indian-Trinidadian heritage to his classic European training, to the diverse kitchens in which he built his career, each step along the way has led Balloo to become the chef he is today.

Through the international program of extended studies at Johnson & Wales, Balloo traveled to Belgium to work at Hotel Métropole in 1998. Under the French Master, Chef Dominique Michou, Balloo honed his classical culinary training skills. Balloo went on to become Junior Sous Chef at Azul in Miami’s Mandarin Oriental Hotel under the leadership of Michelle Bernstein. From contemporary Spanish cuisine at La Broche in Miami to the intersection of Japanese, Brazilian and Peruvian dishes at SUSHISAMBA in New York City, Balloo eventually earned Executive Chef status. He partnered with Amir Ben-Zion to launch Domo Japones in Miami’s Design District.

An opportunity to reconnect with Samba Brands Management in 2009 brought Balloo back to the growing restaurant group as Chef Partner of SUGARCANE raw bar grill, which opened in 2010. It was here that he was able to bring together everything he had learned about global flavors and techniques. Shortly after the restaurant’s debut, SUGARCANE raw bar grill was named a James Beard Awards semifinalist for “Best New Restaurant” and Balloo was dubbed “The People’s Best New Chef” by Food and Wine.

The Katherine, which opened in 2021, joins Mrs. Balloo at the Wharf Fort Lauderdale and virtual eatery Balloo Wallah in Balloo’s ever-growing family of restaurants.