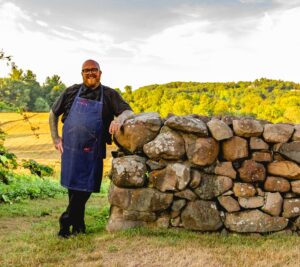 Chef Tyler was born and raised in Southern California where he began his career in professional kitchens. Tyler has been fortunate to work throughout the country for some of the best Chefs in the business. His passion for his craft and locale is evident in his cooking style, which is inspired by simple quality goods and the culinary traditions of New England.

Tyler has become a well-known name in Connecticut, recognized for his numerous restaurants, generosity, and one-of-a-kind sense of humor. His restaurants have garnered numerous statewide awards including best restaurant overall (six times), three best new restaurant awards along with many more.

Tyler has been nominated for the James Beard Best Chef Northeast award seven years in a row. He has also been named CT Chef of the Year. Tyler was a contestant on Season 15 of Top Chef, as well as on episodes of Chopped and Beat Bobby Flay.

Tyler and his team are extremely involved in philanthropic works and pride themselves on helping raise money for many local and national charities.

Tyler is happily married and has three children Violet, Gavin, and Averi, and an English Bulldog named Marshmallow.