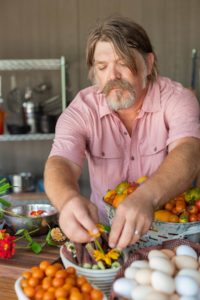 Tyler Brown understood early on how food and community intertwine, as the evening meal was his family’s sacred time. That experience has stuck with him through his career.

After culinary school at Johnson & Wales University, he started as a line cook and then served as sous chef at Peninsula Grill in Charleston and the Fearrington House in Pittsboro, N.C. Later, as chef de cuisine at the Capitol Grille in Nashville’s Hermitage Hotel, he helped shape the restaurant into a four-star, four-diamond destination. When he became executive chef in 2006, Brown began implementing seed-to-plate sourcing with the creation of the heirloom Garden at Glen Leven and 150 head of heritage Red Poll cattle at Double H Farms.

But he wanted to dive deeper – seeking to better understand the biodynamic calendar’s influence, and engaging all of the senses in learning, doing and sharing with others. In 2015, Brown became senior vice president of hospitality and agriculture at Southall outside Franklin, Tennessee, where he could continue to grow professionally while creating a sustainable luxury resort focused on landscape-scale, symbiotic food cultivation and an immersive epicurean experience. Set to open in 2021, Southall has already built a reputation around The Rambling, a series of seasonal, live-fire dinners.