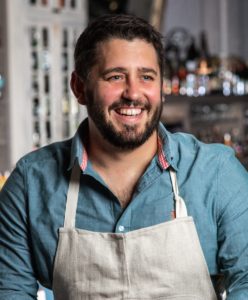 Gilson began his career at age 15, when he apprenticed with Chef Charles Draghi at Marcuccio’s in the North End.  He completed his formal culinary arts training at Johnson & Wales University in Providence, RI, where his expert wine knowledge won him the 2004 R.C. Knopf Student Achievement Scholarship, which funded a three-month tour of wineries in Napa Valley, Venice and Paris.  Chef Gilson has had stages at Oleana in Inman Square, Silks at the Stonehedge Inn outside of Lowell, and at the restaurant of London’s most exclusive hotel, The Lanesborough.

Gilson made his name in the Boston area in 2007, when he opened the Garden at the Cellar, a mid-priced restaurant that quickly built up a large following in Cambridge.  He left in 2011, as a leader on the forefront of the pop-up restaurant movement in Boston, to introduce a series of successful restaurant ventures, including Eat @ Adrian’s located on the Cape during the summer of 2011.

However, it was at the Herb Lyceum at his family farm in Groton, Mass. where farm to table cooking truly became second nature for the burgeoning chef. Gilson was only 17 years old when he began cooking there, and the experience set the foundation for his appreciation for farm fresh produce and the merit of seasonal cooking.

Gilson’s time at the Herb Lyceum has molded the direction of Puritan & Company, where guests will find touches of his familial hospitality and their passion for herbs sprinkled throughout their experience. It is here that Gilson has realized his dream of owning a refined yet rustic neighborhood restaurant starring the farmer’s market fare he grew up with as a local farmer’s son. Gilson’s vision has seen early success, as within three months of opening his doors he received two 2013 James Beard Award nominations: Best New Restaurant and Rising Star Chef of the Year.  Puritan & Co. was also named one of Bon Appetit’s “50 Best New Restaurants” of 2013. Also, Will Gilson appeared on the “Today Show” this November.

In his spare time, Gilson can be found tending to his labor of love for making charcuterie and uploading photos to Instagram that showcase his travels to food cities. He is an avid reader of vintage cookbooks and has amassed a lively Twitter following that includes the local Boston area press.  He believes wild boar is underappreciated, and his favorite vegetable is the parsnip. He is not above restaurant hopping in a pig costume, should the occasion so require.