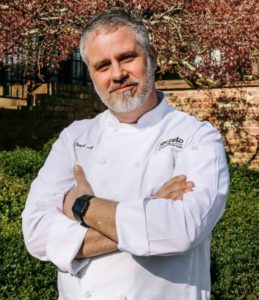 Executive chef Boyd A. Rose’s penchant for Southern cuisine began when he was just 4 years old living with his mother, grandmother and aunt in Alabama. “Cherokee Indians taught my grandmother how to cook cornbread and collard greens. I spent many days sitting on the kitchen counter stirring cornbread dressing as a little kid,” Rose recalls.

A graduate of Johnson & Wales University in Charleston, South Carolina, Rose began his career working under chef Robert Carter at the renowned Peninsula Grill. He went on to hold executive chef positions at Rainwater and Milton’s in Alpharetta, further developing his signature style of farm-to-table, Southern-inspired fare. At Milton’s, Rose was instrumental in building and tending to the restaurant’s on-site garden, creating true “seed-to-fork” menus featuring seasonal produce grown just outside the kitchen. Rose also helmed the kitchens at Sip Wine & Tapas and Etris Kitchen & Bar in Roswell, where he continued to build a loyal following before his arrival at Secreto.

By focusing on a smaller menu, Rose is able to play with seasonal flavors, utilize more Georgia-grown ingredients and have greater flexibility to alter items based on guests’ feedback. “My mother cooked six nights a week, and that’s a lost art now for many families. I want to provide that soul-satisfying meal for our patrons.”

He still draws upon childhood memories and family recipes as inspiration for his cuisine – an updated take on his grandmother’s famous carrot cake appears on Secreto’s dessert menu.

Although Rose is focused on pleasing guests with his culinary creativity, he’s equally interested in keeping the restaurant an exciting place for his employees. “You can’t get anywhere without
teamwork; luckily we know how to dance together,” he says of the chemistry among the staff at Secreto.

Rose resides in Roswell with his wife, Emilie, and two children, Ava and Finn. When he’s not in the kitchen, he can be found spending time with his family or charming diners at Secreto. “I think guests enjoy that personal attention, and I have the gift of gab,” he jokes.