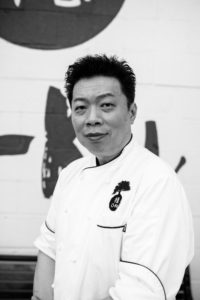 Joining the team in spring 2019, executive chef Jack Fang brings more than 35 years and a wide array of experiences in the restaurant industry to O-Ku Atlanta – from leading kitchens across Georgia, to owning a restaurant and becoming a culinary arts professor at Kennesaw State University. Mentored by master sushi chef Tsutomu Fukuhara since the 1980s, chef Fang exhibits an enthusiasm for and impressive understanding of both honoring traditional sushi culture and showcasing individual technique and style.

After teaching his final class on sushi culture in 2016, Fang consulted on a number of Japanese restaurants around Atlanta before joining the Indigo Road to lead the culinary team at O-Ku. Prior to this brief hiatus from a day-to-day restaurant career, Fang owned his own award-winning restaurant, Purple International Bistro & Sushi, in Greenville, S.C. from 2010 to 2014, and previously worked with recognized Atlanta chef and restaurateur, Tom Catherall, of the former Here To Serve Restaurants. His time in Georgia began in other cities, though, with stints in Rome, Athens and Doraville, Ga. – Doraville where he first entered the industry in the 1980s, at August Moon Japanese Restaurant. Fang’s experience at August Moon began as simply a job to help support his family, which quickly transpired into his motivation to pursue a career in the restaurant industry – and where he met mentor Fukuhara.

Chef Fang displays a fervent passion for the preservation, respect and awareness of sushi tradition, recognizing the techniques of various regions of Japan and beyond. Since he was young, Fang has enjoyed creating: sculpting, painting, sketching – and now, creating both Japanese cuisine and memories for customers. His favorite part of being a chef is sharing experiences with guests, whether via forging personal connections or simply helping curate memorable dining experiences. He’s been featured in Travel + Leisure and is a member of the All Japan Sushi Association and US Taido Federation. In his downtime, Fang enjoys fishing, golfing, martial arts and riding his motorcycle, and currently lives in Johns Creek with his wife and children.